The medical device industry is a multidisciplinary and technology-intensive industry. Multidisciplinary intersection is reflected in its involvement in polymer materials, life science, clinical medicine and other disciplines; Technology intensity is reflected in its production technology involving the joint application of medicine, machinery, materials and other technologies, which is a typical high-tech industry. Because it is related to human life and health, it is an important part of medical and health system construction and has a high strategic position. The development degree of medical device industry has become an important index to measure the level of a country's science and technology and the level of national modernization. The industry has become an important part of modern clinical medicine, disease prevention and control, public health and health care system, and has formed a broad market, stable demand industry.

With the development of the economy, the growth of the population, the improvement of the aging degree of the society and the enhancement of people's health care awareness, the global medical device market demand continues to grow rapidly. The medical device industry is one of the fast developing industries in the world today. According to the statistics of the eu medical device commission, the total sales volume of the global medical device market has risen rapidly from 246.8 billion us dollars in 2004 to 501.8 billion us dollars in 2014, with a compound annual growth rate of 7.35%. 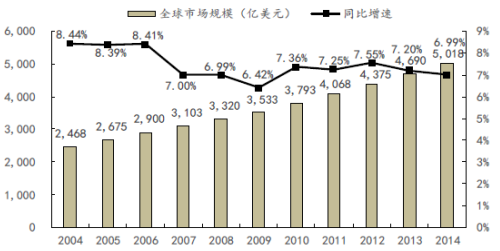 From the perspective of the global market pattern, the medical device industry in developed countries in Europe and the United States has entered the mature stage and formed a huge sales network after long-term development.